augustus 21, 2017
That dreaded deadline keeps creeping closer, so where does the project stand? By my own account, the game's had steady progress throughout development, and I've been picking up new things fast enough to have the game keep evolving noticeably each week. But at the same time, it's starting to dawn that my chances of finishing by the end of August are slim, to say the least.

What have I been doing the past week?

Project Bird is going to consist of two parts. An overlook screen, and an action screen. Both of them should be meaningful to the player and add meaning to the game. They are both integral for this story through gameplay thing I'm trying to accomplish. So far, I've been working mainly on the action screen (portrayed in the resize screenshots), and that one is nearing completion, in a fashion that has the potential to make me proud for making it. But although it is starting to feel right, the action screen and its gameplay need the other screen to provide context and a goal/impetus for the player. It is the workload associated with the making of this second game that I might have underestimated.

As mentioned in last week's post, I ended the support for multiple screen resolutions and aspect ratios last week.

Halfway point for applying the new logic for scaling and placement. This is the smaller screen working with the regular sized assets for the cat and lead bird. 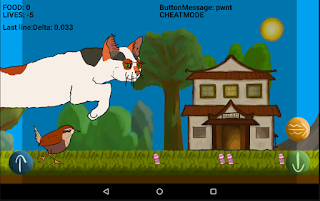 
However, this week, I kept getting reports from my friendly testers that they were getting OutOfMemory errors, following the new release.  Bigger screens got bigger images, and that had a bad effect on memory. I had to dive deep into memory allocation and rerererevisit the way I draw images on the screen. At the beginning of this plunge, it seemed simple enough, as if I could keep most of my code. Luckily, it turned out that impression was right. I could scale and rescale images to limit their size in memory. 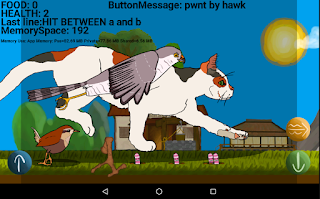 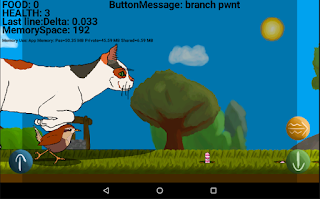 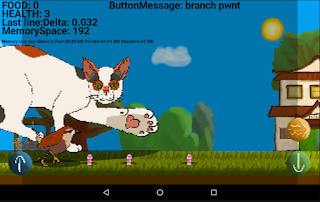 Now I don't think it will be necessary to ever scale beyond factor 2, most devices don't need any of this memory scaling in fact, and on the bigger screens the screen size scaling and the memory scaling should make for pictures that are actually as crisp looking as the original.

It might be you noticed the sparrow hawk in there. Again, I've had some luck finding drawing references for free online.* The same goes for music. Can't make or pay for it? (Say because you're still starting up this endeavor and budget right now is tighter than a twelve-year-old back injury) You can find creative commons royalty free titles to tide you over until you can. 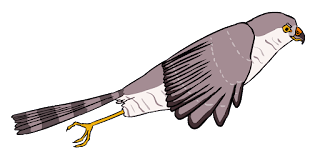 
Add to this the relative ease with which you can publish your games these days via platforms like the Play Store for Android (I would imagine Steam being similar for PC titles). Sometimes I think I'm being too hard on myself and unrealistic if I think I could've made this title just as easily ten years ago, when I was still in school and had more time.


* Like with this weeks video I used for animating our bird of prey https://www.youtube.com/watch?v=AYOx-iCMZhk