Hopscotch - weeks 9 to 12 of finishing a video game

It's been a while since the last update, what have I been up to? Back at working an "actual" job, mostly. But luckily for my sanity, and for those readers waiting for an update, the game is still creeping along too. Progress is slow, compared to when I could invest all of my time into it, but at least it's there.

In August, estimating what I would be able to do once I was back to grinding an actual job was hard. The numbers for September put me at six man-days of work in that month. What will happen to that rhythm in the coming months depends on circumstances.

I've tried several schedules, but the one that seems to work best has me working the paying job Mondays to Thursdays, doing the comic in those evenings, which leaves me the whole of Friday and a differing part of Saturday for the game. I work the paying for four days instead of five or 4/5ths like they call it here. Sundays I take a day off because I feel I need to, in order to charge those batteries.

At the moment, I think I could manage a release to production (meaning to the general public instead of testers) late November, early December. Finishing in 2017 would be really nice, as starting from January, I'll be able to devote more time to this gig. Well, the second chapter/game in the game making adventure would be the plan. Having that first game out would help boost confidence for this more risky move (the assured income is going to take a very noticeable dip), especially since I'm hoping to get some time off again to invest in social activities (outside of work). Interacting with other humans seems good for long-term health and all that.

And what about the advancements for the game itself? Well, I've given some attention to the technical part of creating some actual revenue. I've gone with, on the one hand, interstitial ads, which on average should only show up once or twice per day per user, and on the other, I've added some IAP's, or In-App Purchases. One IAP for an ad-free experience, the other for allowing very content consumers to support the development of the next game. As monetization models go, this one should be pretty unobtrusive and not too intrusive, while also giving everyone the chance to play no matter their financial situation. It also means it will be harder to make an actual buck from the game; but since this one is the first I've ever done, just having something trickle forth** seems like it would be a good start.

Speaking of the actual game, I spent most of the time on refactoring. Buttons work better now, and more uniformly, jumping has become framerate independent***, and I put in some backgrounds. The several screens leading up to the action part of the game became much more presentable thanks to those backgrounds. Let me present one of them to you now. 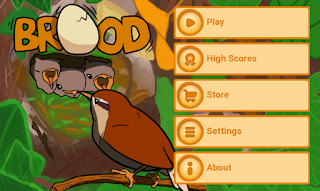 
This thing is starting to look like an actual game, right? Those buttons will probably evolve some more, but I'm starting to get somewhat proud about how things are turning out. So that's it for this update. Check back somewhere in November, or follow Saffron Streams on Facebook to be notified automatically when the next update hits.

* For one to two hours per night. Yeah, those can still take time, might have to do with the fact I'm trying to draw something new each week, and comic up with an idea (as crummy as they sometimes are) isn't always easy. It still amazes me how they made whole comics in one and a half hour for Strip Search. (If you haven't seen that show but like drawing/strips/webcomics, then I highly recommend seeing it.)

** Then again, I have made about €2.5 in a year off of the webcomic (Comedy Reflux), making something like that per day I would call a nice trickle. Something you could call an actual additional income if you were inclined towards not hurting my feelings. The comic ad revenue has a payment threshold of €70, so at this rate, I can't call it anything of mine until 2044.

***a bug that went unnoticed for long enough to put me to shame :-)