That which remains - week eight of making a video game

september 03, 2017
So that's it then, eight glorious weeks of indie development are coming to an end. I have been on a path of exploration and self-growth, with a goal that became clearer as I a neared it, but haven't reached. The game is not yet finished.

By new estimates, there is still about ten to fifteen man-days of work left, having put in about forty. On average then, I managed about five man-days per week during my "time off". I worked more during the second half than during the first, but during both, there were unforeseen factors that leeched a few hours away here and there. I kept on producing the comic for Comedy Reflux too, which ranges from taking a half to a full man day, depending on how quickly inspiration comes and how much detail I want to put into the drawings.*

So what remains? I have the goal in sight but don't know when I'll get there. If I can manage one and a half man-days per week, by working on Saturday or Sunday and a bit after work each day, then I should be finished by the end of October, at least with development. So at this point in time, a release in November seems realistic, doable.

I will keep updating the blog until we ship (in a digital fashion, to the play store) our product, but no longer weekly. I'm thinking every fortnight or perhaps tri-weekly. That way I should be able to show something new each time.

So, progress. This last week I finished the initial pass of the family management screen. The testers got to play around with it for the first time with the latest alfa release. So that means that all big gameplay elements are in place. There's still a lot of tweaking and polishing left to do, though. 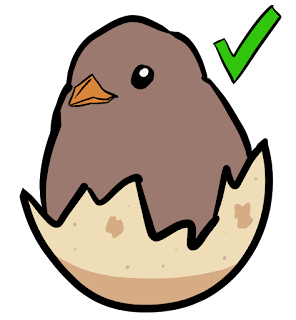 Players need to do their best to keep their chicks well fed. 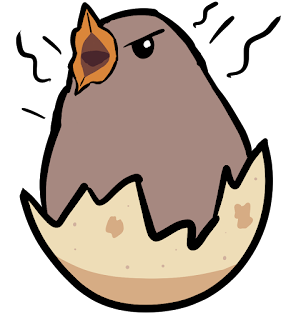 This chick has clearly been waiting for its food for too long.

And of course, there are some, largely static, screens left to implement. They need buttons and a nice background. Oh, I also did the first technical implementation for information overlays. These will come in handy to get the beginning player on his way to bird parenthood. The game is oriented towards being very light on text, but a few words for context and a gameplay explanation remain inevitable, at least at start up.

* I should learn to add less, as much of the finer detail is lost when I resize it for the website. If I ever put them in a book, however, those high-resolution images might get their time to shine and let their secrets be uncovered.